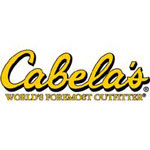 Cabela is a renowned retailer organization. It is well known recreation trade name for its services related to outdoor which includes hunting, fishing, etc. Since its inauguration in 1961 it is regarded as the world's leading outfitter. Cabela offers a wide range of high quality products and they also provide advanced customer services. Cabela's journal magazines are aimed to help the hunters. In these magazines, adventurous incidents are published to encourage the hunters. Users can get these magazines under one, two, or three year subscriptions. Cabela's Shows on television also inspires the hunters and helps them to learn many important issues regarding hunting.

There are currently 6 consumer reviews about Cabela's available. Share your review.

Please take a note that you are about to post a public review about Cabela's corporate office on CorporateOffice.com. This review will be public, so please do not post any of your personal information on this website. If you would like to contact the corporate offices of Cabela's, please use their contact information such as their phone number, website, and address listed above to contact them. However, sometimes staff from Cabela's headquarters do read the reviews on this website.